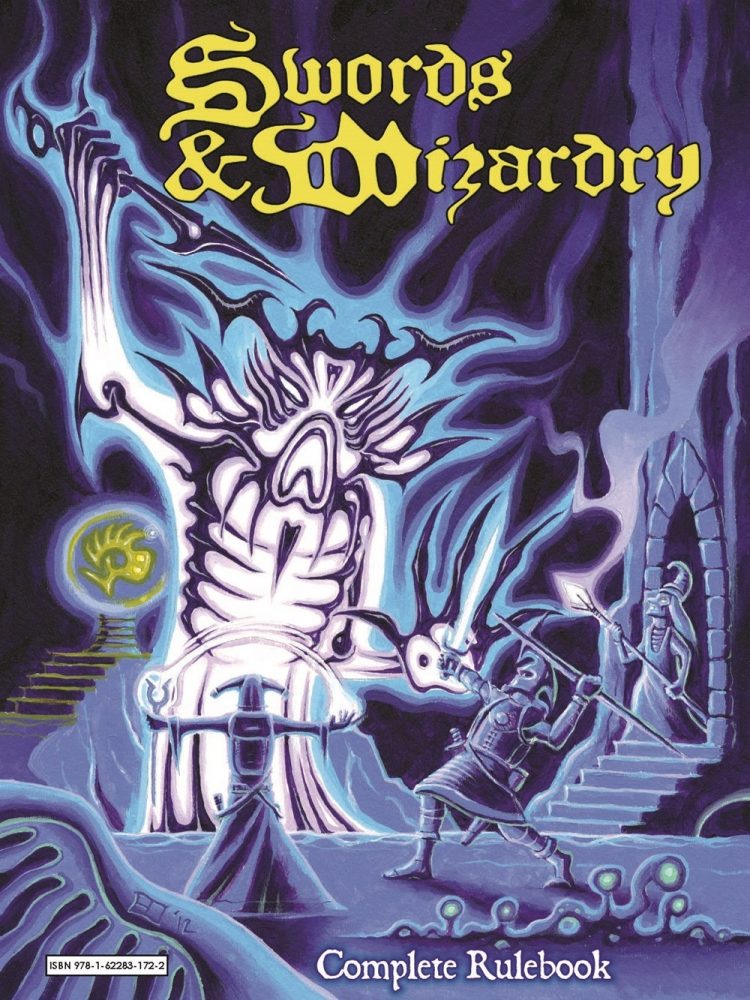 One of the modern byproducts of getting into tabletop roleplaying games is that you accumulate PDFs. The proliferation of sites like DriveThruRPG and charity bundle sites like Humble Bundle and Bundle of Holding make it very easy to have piles of rulesets to games in electronic format. What used to take up tons of shelf-space now sits in a folder on your hard drive. While I much prefer having physical books to read, this trend makes it easy to expose yourself to a wide variety of game styles. It’s especially easy because many of these games are available in PDF for free or next-to-nothing. One wing of the hobby that has taken advantage of this movement is the Old School Revival.

The Old School Revival is a trend in tabletop roleplaying that could easily take up a whole series of articles by itself, either as a history or a philosophy. I’m too new to the hobby to do write such a retrospective, or even to sum it up. But in short the Old School Revival (normally abbreviated as OSR) encompasses a variety of game systems that are either directly or indirectly inspired by the rules of classic roleplaying games, which often means Dungeons & Dragons. Many OSR games are overt (and it should be noted, legal) recreations of games like the original 1974 D&D, the various Basic sets from the late 70s and early 80s, or the 1st edition of Advanced D&D. Those that aren’t direct copies of the rules (known as retroclones) are often very similar rulesets in new settings, or else are inspired by older games in a more abstract way. The overall goal is not generally to dial back the clock on advancements in game design, though there is certainly some of that. Instead it’s focused more on making sure that a certain type of game stays relevant, one that is much deadlier, much simpler, and more reliant on the players to create interesting moments than on the DM to meticulously create things.

If you’ve been reading my work for any length of time you know that I have a soft spot for old games. As a result the OSR has taken up a huge amount of my spare reading lately. Games like Basic Fantasy Roleplay, Swords & Wizardry, and Labyrinth Lord are meant to evoke very old RPGs, but they do so in a form that is much more readable than the classic versions of the games. I’m also a big believer that any gamemaster in any game needs to at least have a passing understanding of how things are done in other system. It’s a little like understanding another language, which can have the effect of helping you understand your own a little better. Knowing other rulesets can only make you a better gamemaster.

But as I’ve given it more thought I find myself thinking about that “old school” moniker. As I write this I am two weeks away from my 37th birthday, and I feel like I am surrounded by people trying to get me to return to a feeling I had all those years ago. Movies, TV shows, and video games have all leaned hard into the familiar. And the thing is, it absolutely works. We all want to be reminded of how we felt when we were young. Whether it’s comfort food at home, sequels to familiar movies at the theater, or classic RPGs on the table, you’ll never go broke with nostalgia.

However I’m also becoming more aware at how the promise of nostalgia is often more satisfying than the nostalgia itself. Throughout 2019 I have buried myself deep into retro PC gaming. Much of it has been rewarding (I wrote about the first two Monkey Island games a while ago) but far more of it has been an object lesson in why things aren’t done a certain way anymore. It turns out I don’t want to have to take notes during Ultima Underworld, engage with the janky controls of Thief, or look at the ugly polygonal graphics of Jedi Knight. I love the idea of Sid Meier’s Pirates! and Railroad Tycoon, but both games are just too old-fashioned in their interface for me to fuss with. It’s telling that those last two Sid Meier games have had semi-recent remakes in the last 20 years, making them far more approachable. Sometimes progress is just that, and to pretend otherwise is an act of self-delusion.

Even those OSR retroclones tacitly admit this. The mere act of reorganizing old rulesets requires a bit of interpretation on the part of the writer. This is especially true now that all of the old editions of Dungeons & Dragons are available for legal download in PDF form, something that wasn’t true when the OSR began some fifteen years ago. If they were perfect such reimplementations wouldn’t be necessary in the first place. Just go download the original Players Handbook and call it a day. No one would accuse the writing of Gary Gygax or Tom Moldvay to be perfect, of course, but in reading some of the discourse surrounding these retroclones there’s certainly a touch of wistfulness, a desire to go back to things as they used to be. In this nostalgia’s most sanctimonious form, there is just a hint of scorn for “kids these days,” with their desire to have less character death and detailed character abilities.

(Hopefully I don’t need to say this, but I don’t mean this as a criticism of the OSR movement, or of any of these particular systems. It’s more just an observation from someone who still plays a lot of 5e, and has only been roleplaying actively for a couple of years.)

I’m no better of course. I have a lot of thoughts about what current game design trends are good and which are bad. I find myself increasingly out of step with how board gaming in particular has evolved. I just don’t want games that are trying to recreate experiences from other kinds of games. That means no board games trying to be RPGs or tactical minis or CCGs. No more multi-faction conflict games where everyone has a new win condition, alright? And while we’re at it, let’s stop crowdfunding everything! Let’s slow down the rate of release so that old reviewers like myself can keep up! Oh, and there are too many video reviews. Why don’t people write things anymore?

Maybe you find yourself nodding in agreement with some of those things, or maybe you think I’m going off the deep end. Mayne some of those trends really are unsustainable and will end. But the point is that when they end they won’t go back to how they were before. Everything has changed, because everything is always changing. That’s why so many attempts to recapture nostalgia and how things used to be fall totally flat. It can never be truly recaptured, because we aren’t the same as we were back then. I can’t go back and experience my favorite games for the first time, even if I had a perfect set of circumstances. The game didn’t change, I did.

And that’s a very good thing. So many of my first experiences with games were deeply underwhelming, and it was only after constant exposure that I understood their brilliance. There is real pleasure to be found in those games that keep on evolving as I do. That’s why I have such a deep love for Cosmic Encounter, a game so multifaceted that I am still discovering new elements. That’s why roleplaying has become such a huge part of my life, because I always have the freedom to adapt the game to wherever I am at the time. And some games, like Power Grid, have served as a little island in a sea of transition. This is its own kind of nostalgia, but one that is driven more by long term relationships with pieces of culture than by a misguided attempt to go back to the way things used to be. One embraces the changes of life, while the other wants to deny their existence.

Then of course there is the need to always be in conversation about our past. We understand our future much better when we can look at the things that came before. This is where I think OSR games have shown their greatest value to me. It’s very hard to read, for example, the 1st edition Monster Manual, and figure out what roleplaying must have been like in the early days. But thanks to a lot of these OSR games, it’s not a hard thing to imagine. And it has also served as a sort of Rosetta Stone for board games I’ve loved for many years like Dungeonquest and Talisman. While to modern players they feel random and deadly, to players in the early 1980s they truly were the most accurate representation of roleplaying in board game form.

Hopefully this hasn’t come off as either a plea for old-school gamers to shut up and quit whining, nor as a wistful look into the days of yore. In truth we all tend toward either one of those extremes now and then, because everything in our lives is changing at different times and in different ways. As gaming moves in whatever direction it’s headed, it’s so valuable to have one eye on what came before, not because we want to go back there, but because those things are still with us now.